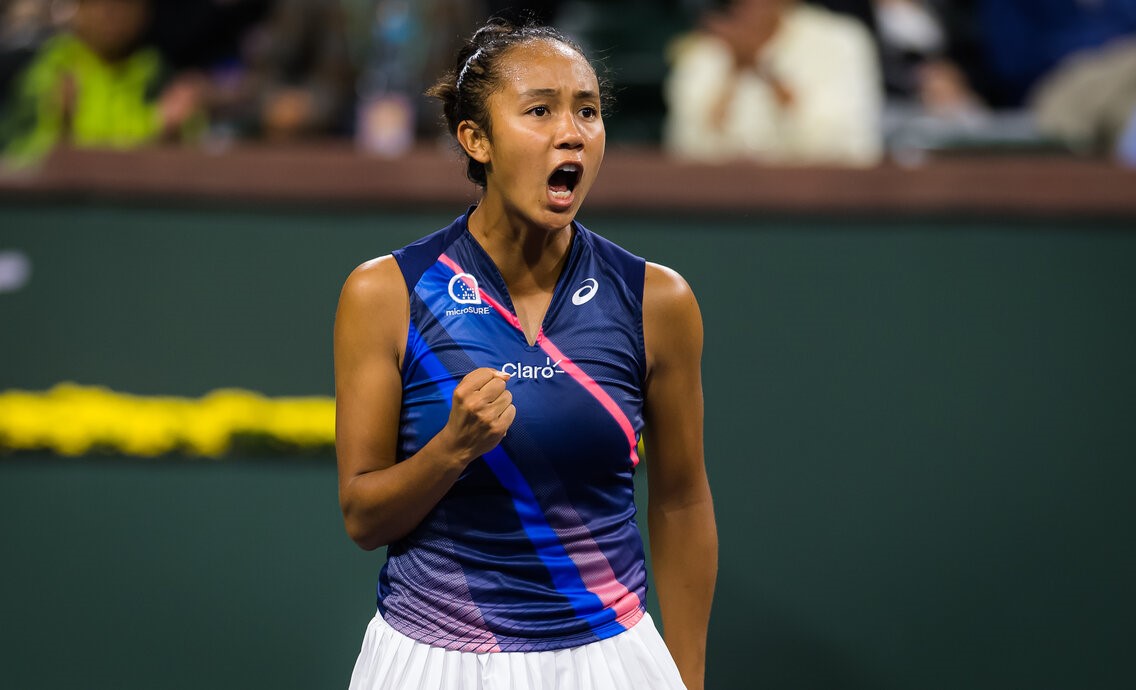 As one of four sets of siblings competing in Delray Beach on opening weekend, the Bryans will take part in the event’s first-ever mixed doubles match at 2:30 p.m. on Sunday, Feb. 13. Bob will partner with Boynton Beach’s Fernandez while his twin brother Mike will team up with the US Open finalist’s 17-year-old sister Bianca.

The Bryans’ participation in the mixed doubles match will come after they return to Delray Beach to take part in the ATP Champions Tour event for the second time. They will be joined by another pair of brothers in Luke and Murphy Jensen along with James and Thomas Blake. Two former Delray Beach Open singles champions – two-time winner Jan-Michael Gambill and 2006 champion Tommy Haas – as well as former ATP stars Jesse Levine and Scoville Jenkins round out the field for the three-day ATP Champions Tour event.

Leylah defeated two former World No. 1s and two top five players to reach the US Open final in September shortly after turning 19. In March, she claimed her first WTA title as an 18-year-old without dropping a set in Monterrey. She also won the 2019 French Open junior title.

Bianca, who is younger than Leylah by two years, captured the J4 Guatemala\Copa Universidad Galileo girls’ title in 2020 and was a quarterfinalist at ITF/Tennis Europe’s tournament in Prokuplje in July. The Canadian sisters have an Ecuadorian father and Filipino mother.

The Bryan Brothers are six-time doubles champions in the ATP 250 event, holding a 30-7 career record in Delray Beach. They are the winningest team in the history of the sport with 119 titles, including 16 Major titles. The Bryans, who finished as the No. 1 doubles team 10 times, are also the only doubles or singles players to sweep all four Grand Slams, nine ATP Masters 1000 events, the ATP Finals and Olympics, winning gold in London (2012) and bronze in Beijing (2008). Mike is older than Bob by two minutes.

The Jensen Brothers played the ATP Tour event eight times, making the final in 1997 after going on a semifinal run in 1996. Following their 1993 French Open doubles title, Luke and Murphy finished the season as the No. 5 doubles duo on the ATP Tour. Luke, who is older than Murphy by two years, won an additional six titles with four other partners during his career.

James Blake is making his fourth appearance on the ATP Champions Tour in Delray Beach and first with brother Thomas. James, who finished as a two-time singles finalist in Delray Beach, is one of nine players in tournament history to play the event with a top 10 ranking when he was No. 6 in 2007. Thomas, James’ older brother by three years, is a former Harvard All-American that made two US Open doubles appearances in 1999 and 2002. The Blakes won their first event as a doubles duo at Winnetka in 1999 on the ATP Challenger Tour.

Haas held a career-high ranking of No. 2 in the world and captured 15 titles on the ATP Tour. He is also a three-time Australian Open semifinalist and a three-time US Open quarterfinalist. Claiming the singles title in Delray Beach in 2006 in his tournament debut, Haas currently holds the fifth-most appearances in tournament history with nine.

Gambill, a seven-time veteran of the ATP 250 event, is making his second appearance on the ATP Champions Tour in Delray Beach. Winning the singles titles in 2001 and 2003 in the ATP 250 event, Gambill became the tournament’s second two-time champion. In addition to his singles title in 2001, he partnered with Tennis Hall of Famer Andy Roddick to win the doubles title in the same year. That allowed Gambill to become the second player in tournament history to win the singles and doubles title in the same season.

A four-time veteran of both the ATP Champions and ATP 250 event in Delray Beach, Levine won five career Challenger titles in eight finals. Levine also reached a career-high ranking of No. 69 in 2012. Before turning pro, Levine put together a 24-1 freshman record during an All-American season in 2006-07 at the University of Florida, awarded the National Rookie of the Year in the process. Levine currently serves as the tennis director at Boca Bridges.

Jenkins, who is making his first appearance on the ATP Champions Tour, became the first African American to win the Boys’ 18 USTA National Hard Court singles championship in 2004. He made his lone appearance in Delray Beach in 2007 and made coaching stints at Oklahoma State, Wisconsin, Washington and Kennesaw State after his playing days. He is currently a tennis professional at The Club at Ibis in West Palm Beach.

The opening weekend schedule is as follows:

Celebrating its 30th anniversary in 2022, the Delray Beach stop on the global ATP Tour annually plays in front of over 60,000 fans and a television audience in more than 50 countries. On-site it’s 10 days of themed parties, live music and art, the wine and champagne lounge, The Craft bar, courtside tables & bottle service, on-court and covered seating and so much more at the Delray Beach Tennis Center, the winner of the USTA’s 2021 Outstanding Tennis Facility award.

Disclaimer – Match schedule, including number of sessions, dates, times, number of matches and players scheduled are subject to change. Tickets are not eligible for refund or exchange.

About The Delray Beach Open by VITACOST.com: The only tournament in the world featuring an ATP Champions Tour event and an ATP Tour event in the same week at the same venue is held in Delray Beach, Florida, February 11-20 at the Delray Beach Stadium & Tennis Center, winner of the USTA’s 2021 Outstanding Tennis Facility award. The ATP Tour’s first North American hardcourt event of the outdoor season is one of just 10 ATP Tour events in the United States. 2022 will be its 24th year in Delray Beach, and 30th overall. The 3-day, ATP Champions Tour team-event is in its 13th year and was the first-ever ATP Champions Tour event played on US soil. Each year the Delray Beach Open by VITACOST.com brings world-class tennis players and thousands of visitors to Delray Beach and Palm Beach County. In 2010, the tournament received the Discover The Palm Beaches Florida’s annual Providencia Award for its extraordinary contribution to tourism. The City of Delray Beach was also a finalist for the USTA’s “Best Tennis Town” Award and in 2003, the tournament was the recipient of an “ATP Award of Excellence.” For more information please visit www.YellowTennisBall.com.

About The ATP: As a global governing body of men’s professional tennis, the ATP’s mission is to serve tennis. We entertain a billion global fans, showcase the world’s greatest players at the most prestigious tournaments, and inspire the next generation of fans and players. From the ATP Cup in Australia, to Europe, the Americas and Asia, the stars of the game battle for titles and FedEx ATP Rankings points at ATP Masters 1000, 500 and 250 events, and Grand Slams. All roads lead towards the Nitto ATP Finals, the prestigious season finale held in Turin, Italy. Featuring only the world’s top 8 qualified singles players and doubles teams, the tournament also sees the official crowning of the year-end ATP World No. 1, the ultimate achievement in tennis. For more information, please visit www.ATPTour.com.

About the ATP Champions Tour: The ATP Champions Tour brings together many of the greatest tennis players in history for competitive and entertaining tournaments around the world. Players are either formerly ranked No. 1 in the world in singles, a Grand Slam singles champion or finalist, or a singles player on a winning Davis Cup team. Players must be retired from ATP Tour competition and each event can invite wild card entrants of its choice. The Delray Beach Open by VITACOST.com features a 3-day team-format.

About The City of Delray Beach: In southeast Palm Beach County, along the Atlantic seashore, a Village by the Sea that began as an agricultural community in 1895 has become one of Florida’s most popular destinations for visitors, new families and seasonal residents. The City of Delray Beach encompasses slightly over 16 square miles with a permanent population of nearly 65,000 and growing. The city’s charm continues to garner national awards. In 2017 alone the city received three awards: the “All-America City” award from the National Civic League (NCL) for literacy strides (the NCL also recognized Delray Beach in 1993 and 2001), a “Playful City USA” designation for providing 24 playgrounds for residents, and the recognition of Atlantic Avenue as one of the “10 Great American Shopping Streets” by USA Today. In 2012 during the nationally televised “Best of the Road” special, Delray Beach was chosen by Rand McNally, USA Today and the Travel Channel as the “Most Fun Small Town” in America. In 2014, USA Today named Delray as one of the “Best Atlantic Beaches in Florida.”